This brief review — mostly unfavorable in its view of the book and of Dreiser qua writer — is incisive, in my opinion.

I have long felt that Dawn is a sloppily written and inferior work; and that it is far beneath Dreiser’s A Book About Myself (later published as Newspaper Days) by any measure of literary merit. Nevertheless, Dawn does have interest as an autobiographical source.

Isabel Paterson (1886-1961; née Isabel Mary Bowler) was a Canadian-American journalist, novelist, political philosopher, and a leading literary and cultural critic of her day. Paterson has been called one of the three founding mothers of American libertarianism, along with Rose Wilder Lane and Ayn Rand, both of whom acknowledged an intellectual debt to her. She began her journalism career as an assistant to Burton Rascoe (who knew Dreiser personally), the literary editor of the New York Tribune (later the New York Herald Tribune). From 1924 to 1949, she wrote a column for the Herald Tribune‘s “Books” section. 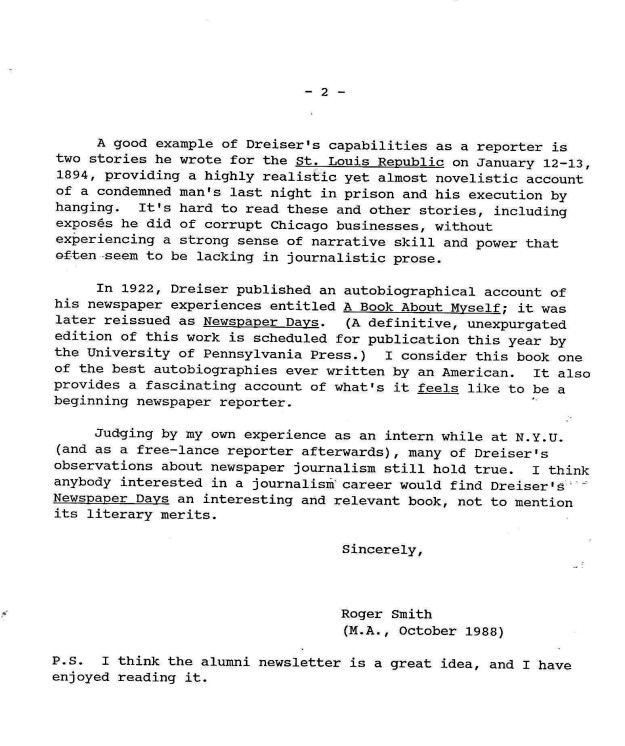 I am posting this letter of mine to the Editor of “News at 10,” the alumni newsletter of the New York University Department of Journalism because it speaks, from the perspective of journalism, about Dreiser as I perceived him and his works at an early stage of my acquaintance with him.

Note that I now doubt that Dreiser wrote the January 12-13, 1894 St. Louis Republic stories about the hanging of Sam Welsor.

I have always felt that Theodore Dreiser’s A Book About Myself (1922) is not only clearly superior to his other autobiographical work, Dawn (1931), but that the former work is underrated and has been neglected (which it should not be) when it comes to the question of ascertaining what American autobiographies are most deserving of being regarded as classics.

A Book About Myself was republished by Horace Liveright in 1931 under Dreiser’s original title, Newspaper Days. In 1991, the University of Pennsylvania Press published an unexpurgated edition edited by T. D. Nostwich which restored passages considered too explicit for publication when the book was first published. This unbowdlerizing increased the size of length of the work considerably.

The following is an excerpt from a review of the original work in the New York Tribune by Burton Rascoe. The entire review is posted here as a downloadable PDF document. It is a stimulating, lively review which shows a fundamental understanding and appreciation of Dreiser. Arthur Burton Rascoe (1892-1957) was a literary critic for the Tribune. He knew Dreiser personally and was the author of a book about him.

I agree with Rascoe’s assessment. One of the chief things to admire about the book and Dreiser as revealed therein, by Dreiser himself, is Dreiser’s candor. He was never afraid to portray himself both as a budding journalist and idealistic young man to be esteemed, when appropriate; and also as someone often inept and jejune who could be found to have acted rashly and behaved foolishly and to have failed to acquit himself well on many occasions, besides giving heed to both “good” and “bad” impulses.

The book is, above all (as Rascoe notes), an honest and therefore authentic coming of age story. And, a compelling one. It should have more readers, but rarely — in fact, hardly ever — does it get noticed or mentioned as a prime example of American autobiography. It seems to have few readers nowadays.