Posted here (PDF document and Word document transcription, above) is the following article:

Chester Gillette was the prototype of Clyde Griffiths, the main character in Theodore Dreiser’s novel An American Tragedy.

Followers of this site may be interested in reading some of the earliest accounts of the Gillette murder case that were published in newspapers in July 1906. The case provided the factual underpinning for Theodore Dreiser’s novel An American Tragedy.
The newspaper accounts — posted here (above) as downloadable PDF files — are as follows:

ACCUSED OF THE MURDER OF GRACE BROWN
Hartford Courant
July 16, 1906 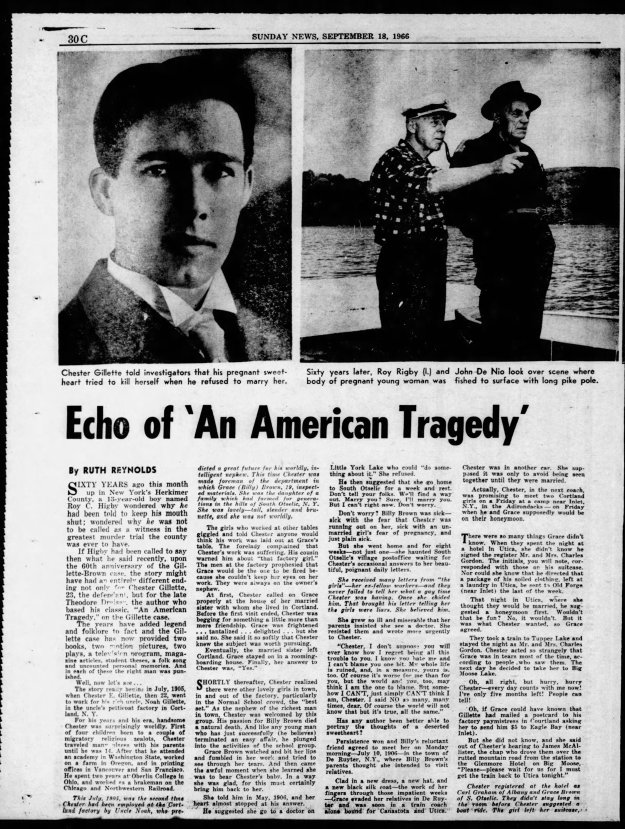 Posted here (downloadable Word documents above) is a groundbreaking article on the Gillette case:

Justice and the Two American Tragedies

Attempt to Forget Life Task of Many Who Were Involved

And also a follow up article by the same author:

Echo of ‘An American Tragedy’

The first article, which appeared in the New York Daily News Sunday magazine in 1935, has never been reprinted and is, for all practical purposes, unavailable. I found a copy on microfilm in the New York Public Library, and transcribed the entire article. It is a very well written and researched account of the Gillette case. There are some minor inaccuracies, but the article contains information available nowhere else. This is particularly true of Chester Gillette’s family and what became of them. Reynolds interviewed surviving family members for the story.
Ruth Reynolds (1904-1971 was a staff writer for the New York Daily News. She won acclaim for her series of “justice” stories on noted criminal cases.