Posted here (above) as downloadable PDF files are two news stories and an editorial focusing on controversy that Theodore Dreiser was involved in in 1931. As is well known, Dreiser did less writing after the publication of his only bestseller, An American Tragedy, and became an outspoken critic of the capitalist system. The articles posted above focus on a controversy which occurred in July 1931 when Dreiser attacked monopolistic practices of utility companies.

The New York Times editorial in whimsical fashion segues from a discussion of Dreiser’s attack on utilities to a billboard advertising the forthcoming film An American Tragedy and Dreiser’s dissatisfaction with the film, which he tried to prevent from being shown. 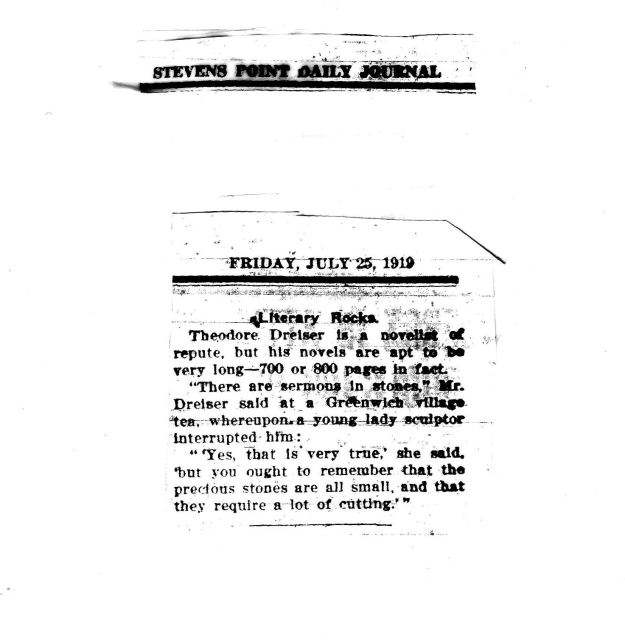 The above downloadable PDF file is comprised of an item in the Stevens Point (WI) Daily Journal of July 25, 1919. It contains an indirect quote from Dreiser about his writing.

Excellent as Mr. Theodore Dreiser is as an author, he is not great enough to be able to insult British people in an interview and then expect them to listen to him as an exponent of democracy. Toronto is tolerant, but not stupid or crazy, and it certainly would be both stupid and crazy if it welcomed a public speaker who “would rather see the Germans in England than the damn’ snobs now there.” Perhaps he doesn’t know Canada has an army in England to help keep the Germans out, that many thousands of Canadians have given their lives to assist the “damn’ snobs” in destroying the most brutal thugs that ever resorted to arms – the people Mr. Dreiser admires and to whom he belongs by ancestry.”

Mr. Dreiser has no proper place on any public platform in Toronto or Canada. The sponsors of the Town Forum made a fatal mistake in bringing him here; the City Council did the right thing in acting to prevent him from speaking.

His subject was to have been “Democracy On the Offensive.” Whatever may be his ideas on democracy, he said enough to show they are contrary to those of this country. He is no morale builder for us. He had better tell his story to Hitler.

The following are remarks by Theodore Dreiser as quoted in the Chicago Daily Tribune, November 11, 1932.

There is an immaterial force that is shaping the world and everything in it, and it compels my reverence. I haven’t the intellect to understand it fully, but I have seen its results in various ways since I was a young boy, and I am now an old man. I am astounded by the brutality and horror rampant in the world, not only in war, but in peacetime, but there is a guiding force, and we are following through to our destiny.

Dreiser went on to say that rich merchant classes in all large countries have been governing them. “These men believe that they are the light of the world, that the common man does not matter, but they are being proved wrong.”

provides a glimpse of Dreiser during his European travels