The Philadelphia into which Frank Algernon Cowperwood was born was a city of two hundred and fifty thousand and more. It was set with handsome parks, notable buildings, and crowded with historic memories. Many of the things that we and he knew later were not then in existence–the telegraph, telephone, express company, ocean steamer, city delivery of mails. There were no postage-stamps or registered letters. The street car had not arrived. In its place were hosts of omnibuses, and for longer travel the slowly developing railroad system still largely connected by canals.

“The Financier, the third of Dreiser’s published novels, marks a distinct turning point in his career. It is at once a departure from his characteristic subject matter and the beginning of his use of the larger canvas to which he knew that his fictional works were most ideally suited. Both Sister Carrie and Jennie Gerhardt had been essentially autobiographical works drawn from Dreiser’s family and work experiences, as was The “Genius,” which was drafted by 1911 but not yet published. Contrasting strongly with those works, The Financier was planned from its inception as an extensive work based (as Emile Zola had advised) upon research. Elements deriving from the writer’s personal and professional lives were now held to a mere shadow of their former prominence. The new story itself was huge, involving a multitude of prominent characters interacting with the central figure over a span of years; it was conceived as a cradle-to­-grave saga, the complete telling of one very significant and individual American life.

“As always in Dreiser’s realist fiction, The Financier is grounded firmly in the socioeconomic context of the author’s youth and young manhood. …”

I loved the way The Financier begins. In typical Dreiser fashion it draws you right into the novel. And, the beginning and opening chapters place you in nineteenth century Philadelphia, what it was like to live there. And for a boy such as Frank Algernon Cowperwood.

Cowperwood is born in Philadelphia, as was the financier Charles Tyson Yerkes Jr., the real life model for Cowperwood. Dreiser closely followed the actual life of Yerkes in The Financier and two succeeding novels. (Dreiser’s three novels — The Financier, The Titan, and The Stoic — comprise the so-called Trilogy of Desire.)

By the time Dreiser began The Financier, he had amassed over 2,000 pages of handwritten notes, some of them verbatim transcriptions of newspaper articles, and he had been saving newspaper clippings from at least a decade earlier when he was living in New York City, Yerkes’ last place of residence.

The influence of Balzac on Dreiser — evident in the latter’s first work, Sister Carrie — has been commented upon frequently by Dreiser scholars (and by me in posts on this site). Zola was clearly a major influence too. This is most evident in An American Tragedy, but it can also be seen in works such as The Financier, as noted above by the late Philip Gerber, an authority on the Trilogy of Desire.

When it comes to An American Tragedy, I feel that Dreiser does not get sufficient credit for the extensive research by him in newspapers that was involved. All we hear for the most part is complaints about how Dreiser plagiarized from accounts of the Gillette murder case and trial. Actually, this was not plagiarism. He drew upon such accounts. And he (for example) quoted more or less verbatim from some of the letters of Grace Brown (the real life Roberta Alden). That is not technically plagiarism. Plagiarism is when one steals another author’s work without giving credit. 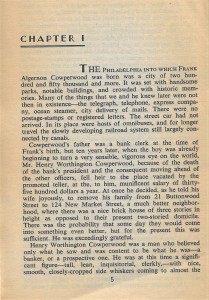 3 thoughts on “Dreiser and Zola; The Financier”